“This is a positive development and one we hope will continue,” Ruger Kahwa, head of office for the UN Office for the Coordination of Humanitarian Affairs (OCHA), which works closely with the NDC, told IRIN.

Though pleased with the increase, NDC hopes that this is not a one-off allocation by the government.

“I have discussed this with the relevant government agencies, and I have taken this up with the deputy prime minister (Leo Dion) and made it known to them that this level of funding should be sustained for as long as we (the NDC) exist,” Martin Mose, the NDC director, said.

Mose and his team of 10 people in Port Moresby, the capital, are now working to utilize the additional funds for programmes they had shelved for years, including capacity building for communities, response and equipping provincial disaster offices.

“Our response to natural disasters has improved a lot this year. Half the year is gone, and we have [already] spent K10 million ($4.3 million) of that money on relief operations,” he said, citing heavy rains, landslides and flooding in the first quarter of 2013.

According to the World Bank, PNG is highly susceptible to natural disasters, including volcanic eruptions, earthquakes and tsunamis. Global climate change has increased the occurrence of extreme weather events, such as droughts and floods, threatening the population, food security and causing economic disruption in rural areas. 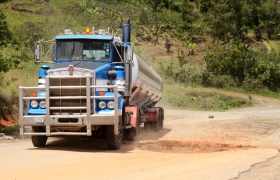 The country has 16 active volcanos and 22 dormant volcanos – the most in the South West Pacific.

Ten of the 16 and all of the dormant volcanos are located within the Bismark Volcanic Arc. Five are located in West New Britain Province, potentially threatening 250,000 people, the country’s interagency disaster contingency plan for 2012 reported.

“Volcanoes are known to generate landslides, tsunamis and earthquakes. Volcanoes in PNG, unlike others around the world, behave differently from each other, but we are monitoring all the activities,” Ima Itakari, assistant director of the Rabaul Volcanological Observatory (RVO) told participants at a recent emergency evacuation exercise in the port city in June.

When the volcano on the 10km-wide island of Manam erupted in 2004, the entire population of more than 10,000 was evacuated to the mainland.

Located on the margins of the Australian and Pacific tectonic plates, PNG regularly experiences earthquakes between magnitudes 5 and 7, and landslides are a common occurrence.

In 1998, more than 2,000 people were killed in Sanduan Province when a 6.8 earthquake triggered a tsunami off PNG’s northwestern coast, wiping out the village of Sissaro.

In 2012, a landslide in Tumbi Village, Hela Province, killed dozens and severely disrupted trade and transport in the country.

“The Tumbi landslide is an example of how resource developments in the country can affect the environment. The widespread deforestation due to increased farming and logging and the effects of climate change are real development issues. That is why the government provided the biggest budget ever,” Mose said.

Rising sea levels are also taking on their toll on the country’s offshore islands, with authorities in Manus, Bougainville and Morobe confirming that some of their islands are threatened and that their communities will have to be relocated.

According to government figures, in the first half of 2013, more than 100,000 people were affected by disasters in PNG, mostly flooding in 15 provinces, resulting in nine deaths, six injuries and more than 600 people being temporarily displaced.

The National Disaster Centre will soon become the Disaster Risk Management Commission when the new Disaster Bill is endorsed and pass by Parliament any time. The Acting Director of...